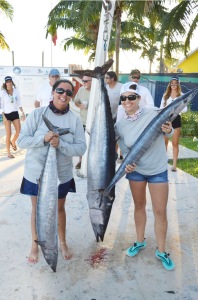 Think it’s nearly impossible for a women’s team to win a big fish tournament? Think again. You might think it ‘Nearly Impossible’ for women to win the big fish category of a fishing competition, but that’s exactly what happened at the 2015 Bimini Big Game Club Wahoo Smackdown VII held this past November!!

The 5 person fishing team named Nearly Impossible was born in 2015. The Team’s anglers are Jessica Hawkins, Jill Mercado (Jessica’s sister), and (cousin) Katie Colville. The Captain, Ralph Hawkins, is the husband of Jessica Hawkins, and his first mate was Dominic Miller.

Let’s get to know these ladies:

The basics – How often do you fish?

The Inspiration – Who inspired you to start fishing?

Experience – When was the first time you fished in Bimini?

Jessica and Jill grew up next door to their family’s marina and charter business, and have been fishing almost their whole lives. They have both been in the medical field, Jessica, an OBGN Nurse, and Jill a Surgical Coordinator. Jessica became engaged to Ralph Hawkins in 2010. Later that year Ralph purchased and refit a 53’ Hatters; at that point Jessica began running charters for fun fishing and tournament fishing.

At the end of 2014, Jessica and Ralph decided to develop a team of ladies to enter and hopefully win fishing tournaments. Luckily, they did not have to look too far.

This is a close-knit family team who have angled their way to success in the Big Fish Category at the 2015 Bimini Big Game Club Wahoo Smackdown VII.

Captain Ralph Hawkins is a charter captain with over 25 years of experience. He was born, raised, and grew up in Hollywood Florida where his love of boats began at the ripe old age of 5. Eventually Ralph became a first mate aboard the Sea Legs III, owned by his family which began in 1969 where they fished the coastal waters of Florida and The Bahama Islands with his father. He earned his captains license in 2003 . Then became captain of Sea Legs III a 65′ custom head boat where he took clients fishing. Working for his parents was tough ,but in 2007 he bought his own charter boat, a new 32′ sea craft and began doing private charters on his days off and joined the SKA kingfish tournament trail.

In 2010 he became engaged to Jessica who was born in point pleasant New Jersey and moved to Hollywood Florida at age 2 with her sister Jill who was age 1 and grew up next door at her family’s marina who was also in the charter business and had a love for fishing. The sister grew up fishing from the docks with Ralph as young children. Jessica graduated Hollywood hills high school with her sister a year behind her and went on to the medical field where she became a nurse in the OBGYN field and her sister Jill became a surgical coordinator. Shortly after their engagement in 2010 Jessica and Ralph purchased and refit a 53′ Hatters and added it to his growing fleet where Jessica and Jill would fun fish and tournament fish as a hobby. Then in 2011 tables turned as Ralph had earned the position and is now the 3rd generation owner of the Sea Legs Marina and Deep Sea Fishing. In 2012 Jessica left the medical field after 8 years to work alongside her soon to be husband in the fishing business.

Ralph and Jessica personally built there first head boat the Super Sea Legs a 75′ head boat designed by Ralph himself. Ralph and Jessica’s son Matthew Hawkins was born on May 1st 2014 and the 4th generation of the Sea Legs Family. At the end of 2014 Ralph and Jessica decided to ease back into the tournament life again as a hobby to have fun and be competitive when he is not showing his clients unforgettable fishing trips. He and his wife Jessica Hawkins along with her sister Jill decided to build a family team of ladies that could grow to be competitive and winners at that. So… Ralph and his wife Jessica purchased a 36′ invincible powered by 3 Mercury Verado engines and Being that finding the exact boat they wanted, would be nearly impossible in a short time frame, The Nearly Impossible fishing team was born in 2015.

The team’s anglers consists of his wife Jessica Hawkins, sister in-law Jill Mercado, And cousin Katie Colville, First mate Dominic Miller , and Captain Ralph at the helm. Ralph uses his knowledge and experience to provide his team and his clients with the finest and most productive fishing experience. He is a full time fisherman and earns his living on the water. Whether it’s taking first timers on sport fishing charters or being hired to captain privately owned sport fish boats, or competitive tournament fishing, because of Ralph’s love of being out on the water there is no other place he’d rather be.

We look forward to seeing them again next year to maintain their title! 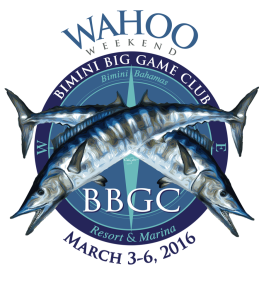