Wahoo Smackdown IX, hosted by the historic Bimini Big Game Club Resort and Marina on November 7-10, 2019, saw more than 70 anglers competing and landing over 1,500 pounds of fish in the process.

A fleet of 14 boats fished, with 11 teams making it to the leaderboard. Over the two days, 108 fish were caught, the largest weighing over 52.7 pounds.

Team Blitzsea, out of Pompano Beach, FL, took top team honors with their 6 largest of 16 fish weighing a total of 251.4-pounds, taking home $8,200 in cash winnings.

Second place Team Remain Calm, out of Pompano Beach, FL, earning $4,500 in cash winnings weighed 13 fish for a total catch weight of 238.3 pounds for their 6 largest.

Team Mi Novia, also out of Pompano Beach, FL, finished third, taking home $2,500 in cash winnings, with a total catch of 13 fish and a total catch weight of 190.7 pounds for their 6 largest.

Team 4 Play caught the largest fish of the tournament, at 52.7 pounds.

Tournament coordinator Beth Watson said the weekend “went flawlessly”, despite having some rough seas and rain with squalls up to 40 knots on Day 2. “The teams that did attend were amongst the most competitive we have seen in all of our years of hosting fishing tournaments.

Tournament festivities included live local entertainment nightly, a cocktail reception for the Captains Meeting, a barbeque at Sharkies Bar & Grill on day one of the tournament, and a closing awards party in the Hemmingway lounge, featuring a buffet, live entertainment and a full open bar.

With more than 50-record-setting catches in the waters around the island, Bimini has often been referred to as the Sport Fishing Capital of the World. Plans are already underway to make Wahoo Smackdown 2020 the biggest best one yet! 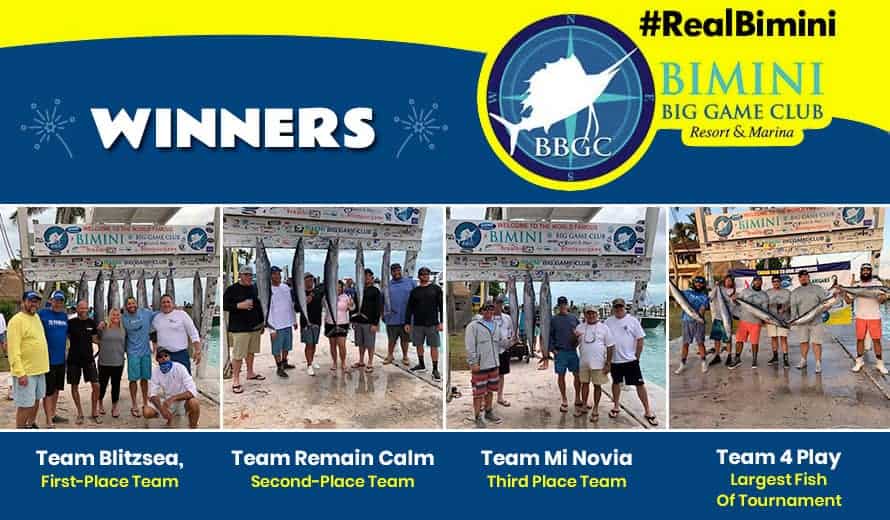